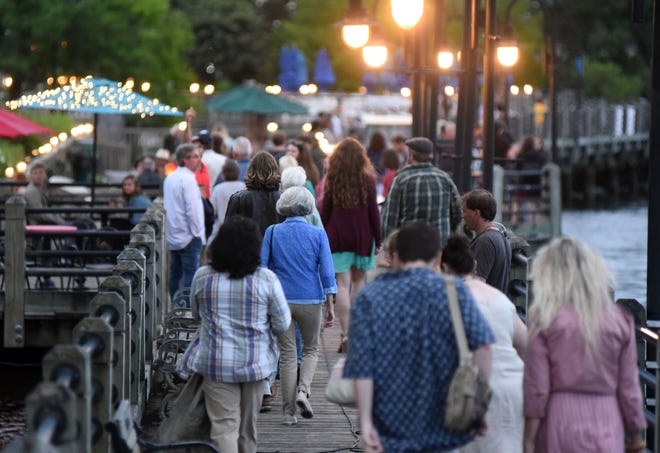 WILMINGTON – Locals and tourists know the Port City’s riverwalk is one of the best in the country, and now it’s official.

This isn’t the first time the city has earned such a distinction. Wilmington placed first in 10Best’s 2014 contest to name the Best American Riverfront, a distinction it still touts in promotional materials today.

The second-place finish, out of the 10 finalists, is still a win for the city that is eyeing a major comeback in the coming months as tourists steadily venture out on vacation again after last summer’s stay-at-home orders dampened the summer season due to COVID-19.

“There is a lot of beautiful riverwalks in the country, I have seen a lot of them over the years, but to be ranked first or second among them is such a tremendous honor for our community and something we should be very proud of,” Wilmington Mayor Bill Saffo said Friday. “Obviously, I wish we would have been first, but second is nothing to sneeze about.”

“The City of Wilmington’s investment in the Riverwalk has transformed it into one of our destination’s key attractors,” Kim Hufham, president/CEO of the New Hanover County Tourism Development Authority, said in the statement. “Visitors and residents of Wilmington and its island beaches know that our Riverwalk is a special place for recreation, dining, shopping, entertainment, and natural beauty. While we had high hopes to again win the number one spot in a USA Today 10Best Readers’ Choice contest, it is quite an honor to be voted as number two among so many outstanding riverwalks across the U.S.”

In her statement, Hufham specifically referenced the completion of River Place on Water Street and the ongoing work the Aloft Wilmington hotel at the Coastline Center and North Waterfront Park as examples of the evolving picture along the Riverwalk.

Nominees for USA TODAY’s 10Best awards are chosen by a panel of relevant experts which include a combination of editors from USA TODAY, editors from 10Best.com, relevant expert contributors, and sources for both these media and other Gannett properties. The StarNews is owned by Gannett.

Top 10 ranking of the Best Riverwalk by USA Today and 10Best readers are:

Reporter Hunter Ingram can be reached at 910-343-2327 or Hunter.Ingram@StarNewsOnline.com.